Being a January baby myself, I have never lived the dream of having my birthday festivities in the great outdoors because it is always too cold. Although, given how things are going with global warming (hello 70 degree Christmas) my wish might come true one of these years. In the meantime though, I was more than excited to plan a great party for Asha at our local park!

I have been really impressed with the number and the quality of public parks in Raleigh.  Clearly the Park and Recreation department has poured-in a lot of money in the recent past since all the playgrounds that I have visited are immensely clean, safe, modern, and creative.  The tiny little Halifax park near our home is no exception.  Even better than the condition of these parks is the cost of the rental.  I remember spending close to a grand in Chicago to rent a room in one of the museums for Asha’s 2nd birthday; here it was less than twenty dollars (!!!) and infinitely more cool! All you parents out there in the Raleigh area…you’ve gotta look into this if you are planning a birthday party for your kid as well.

Since the park was already so nice, I had little to do when it came to party decorations.  Being a self professed hater of “kiddie stuff” I tried to keep it “classy” by using Asha’s artwork and pictures as part of the decor.  I also learned that if there are enough balloons and bubbles, the kids don’t care about anything else.  I had planned a few games but as it turned out they weren’t necessary since the kids were running around entertaining themselves (rounding them up to play an organized game would have just spoiled their fun).  Oh and for party favors, Devang got little terrarium plants from our favorite garden store Logan’s Trading company, in an attempt to get something that wasn’t the plastic-y cheap clutter that is already abundant in every parent’s home.  To make them extra cute, I added little Asha heads saying “merci!”.

For the food we went with mediterranean from Neomande Bakery (exceptional!) because what kid doesn’t like hummus! And instead of the traditional birthday cake we had Asha’s favorite (macaroons), a key lime pie (Devang’s favorite), and an apple pie (my favorite).  Oh and as an ode to Chicago, we added the caramel and cheese popcorn mix too!

The only scare I had was the night before when the weather suddenly called for over 70% chances of rain during the party.  I guess that’s the only drawback of the great outdoors – one can’t control the weather.  Luck was on our side however and the rain stayed away the entire time.  All in all it was a perfection celebration.

And now for some pictures. Forgive me for being that parent… 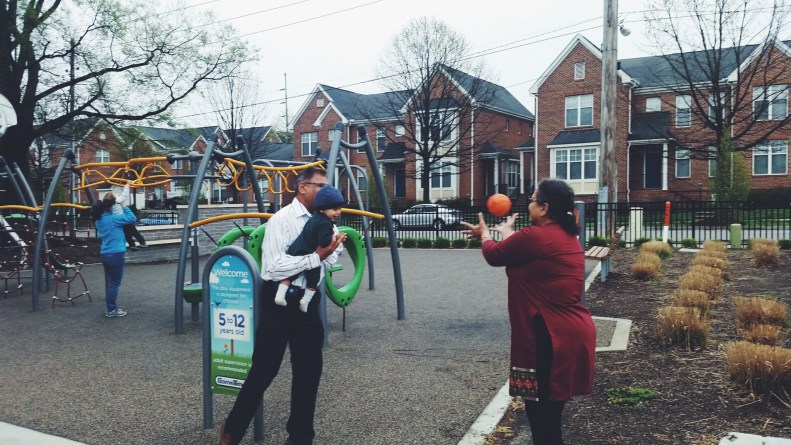 Chika Gujarathi is a children's book author of the Hello Namaste! board book series and a freelance writer. With a passion for storytelling and photography, she has written for many local and national publications on travel, books, motherhood, and style. She lives in Raleigh, NC with her husband and three children. View all posts by Chika Gujarathi

This site uses Akismet to reduce spam. Learn how your comment data is processed.